I heard “Aladdin” retelling and “author of color” and I arrived.

Like I mentioned in my March recap, I’m not entirely sure of whether or not this would technically be classified as an ownvoices novel because I’m not 100% educated or informed on which nations are considered Arab (the author is Pakistani). But I was still hella hyped for this!!

Anyways, after reading the novel, I have… mixed feelings, because this book is middle-grade and also I didn’t enjoy it as much as I expected it to, but I did like it overall!

Also, this book is being released to promote the new live-action Aladdin movie, which I initially didn’t even know!! But it definitely makes sense, considering that it’s being published pretty close to the live-action’s release date.

Disney Book Group is partnering with me for a review and giveaway (of a copy of the novel & a makeup kit!!) Information about the giveaway is at the bottom of the post. Thank you so much to Disney!!!

Far From Agrabah by Aisha Saeed 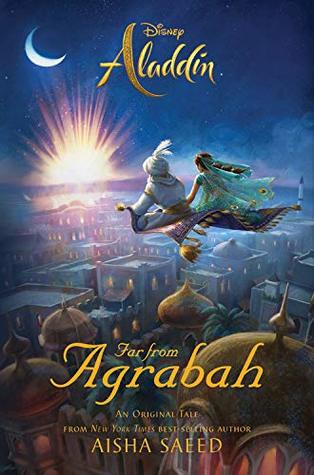 This stunning original novel will tell an all-new story set in the world of the new film, featuring Aladdin and Jasmine.

A magic carpet ride full of adventure, suspense, and wonder written by New York Times best-selling author Aisha Saeed, this story will be a must-read for any Aladdin fans who find themselves drawn into and enchanted by the magical world of Agrabah and beyond.

Aisha Saeed is the author of Written in the Stars which was listed as a best book of 2015 by Bank Street Books, a 2016 YALSA Quick Pick For Reluctant Readers, and named one of the top ten books all Young Georgians Should Read in 2016. She is also the author of the middle grade novel Amal Unbound which has received starred reviews from Publisher’s Weekly and Kirkus and is a Global Read Aloud for 2018. Aisha is also a founding member of the nonprofit We Need Diverse Books™. She has been featured on MTV, the Huffington Post, NBC, and the BBC, and her writings have appeared in publications including the journal ALAN and the Orlando Sentinel.

My main thought about this is that it definitely reads like a novelization. It doesn’t go much further than being a part of Aladdin’s story and making the characters stand out on their own in this novel?

I definitely want to note that this is a middle grade novel, not a young adult novel (which is different than what I originally thought) and I probably would have enjoyed this a lot more had I been in elementary school!

However, even though it’s middle-grade (and I am not the target audience), I still think that this novel could have been so much more than it ultimately turned out to be.

Far From Agrabah follows both Aladdin and Jasmine in alternating perspectives right in the middle of the story of Aladdin. It starts when Jasmine sees Aladdin as a prince and then later when Aladdin approaches Jasmine on her balcony. The main plot centers on Aladdin’s fictional home, Ababwa, and Jasmine and Aladdin both go to this genie-created kingdom.

The writing really kind of just told the reader instead of really showing, and I think that’s what bothered me the most. I never felt completely immersed in the story or in the heads of Aladdin and Jasmine, and we were kind of just told their character traits. Also, Genie seemed like a really inconsistent character.

This novel also includes random short stories of old historical figures, and they honestly  didn’t really work for me. The first one eventually tied into the plot, but the other ones made me just feel displaced in the general story. I feel like if the writing was better, then I would have enjoyed these stories?

Anyways, this book did have a lot of good points! I thought that the plot was really suited to its own genre, middle-grade, and I think a lot of young readers will really like this continuation of Aladdin’s story! There’s nothing really bad about it, it just… fell short.

I might give my copy of the book to my younger brother to read. If he’s interested.

(Also, the cover is so pretty! I would like it if the title was larger, but the art is soooo nice.)

This giveaway is for:

The giveaway is actually going to be hosted on rafflecopter at right here. This is unfortunately to only open to US addresses (I’m so sorry, my international friends).

This giveaway will be ending on April 30th, 12 am ESt

If you can’t access the link, here is the full link: