no, don’t look in the opposite direction……..

Now that we’ve gotten some self-deprecation out of the way:

Me, writing a recap & returning to blogging?

It’s more likely than you think!

And to acknowledge the hilarity imbued within my title, yes you are indeed getting BOTH a monthly recap & a “yearly” recap for the price of one. Isn’t that great? Remember how much you like deals & saving money as you read the entire post and give me views and stuff.

I really miss you guys :’) and writing posts :’) and knowing what the most up to date books are lmao. HOWEVER, as I return to my god-tier status within the upper echelon of book blogs, I do have a couple of notes:

Also, you’re probably wondering: will I be doing a blogging section of the recap, where I recap my favorite of the posts I’ve written and etc?

Moving on to the reading recap!!

[click on book covers to be linked to their gr pages]

BRO THIS WAS SO MEH. I literally loved Marissa Meyer’s Cinder and this was… certainly not as good… (Cinder was lowkey racist BUT it holds so much nostalgia for me lmao)

The main character was just kind of a RUDE person and had me extremely annoyed. Are you telling me that you don’t have a shred of compassion as a high schooler? Ma’am go eat your bread.

Even though this is enemies to lovers! My favorite trope EVER! But this just relied so heavily on miscommunication that it was NOT even funny.

(advice to all blog readers, if it looks like you’re literally COMMITING A CRIME and you’re not or you have an explanation then maybe explain! instead of just never acknowledging it… just some solid life advice…)

This is a DNF. I did not finish this.

As I stated in my Goodreads review, “Did I try, though? Did I put in the utmost effort that my weak and earthly body could grant me, straining my eyes as hard as I could to try and continue reading?

This is the truth, the whole truth, and nothing but the truth, I SWEAR. Also I only read like 6% of this, but you know what they say! “Yolo!”, and “yolo” I shall do.

And yes, I did mark this as read because I need to get more books on my Goodreads reading challenge… what about it

Wow. How do I explain how much I did not like this book.

The most important fact here is that I was literally catfished by the synopsis of this novel. I am a victim. Could I get one of those comfort blankets? When am I starring on the Catfish show???

I actually had pretty high hopes for this! Like, ooooh, an enemies-to-lovers romance between a soldier and a princess and she’s on the run and it’s a retelling of Anastasia and yay!

But no… this was really bad. Like, really bad. The average rating is 3.78 stars, which is 4 stars more than it deserves. yeah, I said it, this book deserves negative stars.

(The beginning was so slow and then I realized I was at 60% and it was still the “beginning.” Also known as, literally nothing happened COME ONNNN.)

Anyways, read my goodreads review if you want to see some Real Salt come out.

That’s it, that’s my summary.

No but actually this was really really really good, and I love F.C. Yee and this series so much, and this book literally fulfilled my expectations as a sequel in SO MANY WAYS.

Also I love the new covers!!! Honestly I was never really… a fan of any of them… and I still am honestly not a fan of this cover… but it’s better than before…

I was pretty proud of the review I wrote for this book. :’)

But guys this was my first middle-grade of the year and wow… I need to read Katherine Arden’s novels!

(Basically the main character was reading a book when her dad interrupted her and when he did I was like HOSDJ.)

But this was just, overall, really fun! I can think of no imperfections.

Honestly, I’m feeling pretty proud of myself because I’ve been able to force myself to read a lot more successfully recently! Like, I was not that into most of these books… and yet I finished them?!?! GOOD FOR ME!

Also these are the only five (young adult) books I’ve read the entire year. I Have read some historical romance but I’m just like… not marking that (or webtoons / manga).

favorite book: The Epic Crush of Genie Lo ❤ so good…

least favorite book: Romanov (ew) seriously I thought there was going to be a war but it just stops right before anything INTERESTING HAPPENS

diverse books: the only diverse book I read was The Epic Crush of Genie Lo (ownvoices Chinese representation!)… which is kinda low in terms of percentages (1/5)… but also I only read five books so whatever

Guys… you will not believe this… I actually wrote a review for every book I read! In a timely fashion, and also most of my reviews were pretty long! # hell yeah

Heh heh… I’ve already read five books so far ! Which I’m super proud of myself for (and they were all Asian and I didn’t even REALIZE lmao) but not going to lie… one of them was a short story in the When Dimple Met Rishi series, and the other was a graphic novel that took me 11 minutes to read.

Also I started using Notion to track my reading list & tbrs and I literally JUST discovered columns… life is amazing! This is so aesthetic I literally cannot stop looking at it!

Also, I am currently reading three books, which are these:

This was literally one of my most anticipated reads so I don’t know why I haven’t started it until now. Honestly… the writing so far is kind of hard to read? I can’t tell if it’s my attention span tho xoxo. (Like I’ve accidentally started skimming and been like wait What.)

I probably wouldn’t be reading this like ever EXCEPT that I wanted to listen to an audiobook while I was making some pasta and I’ve really liked thriller-type audiobooks so! This should be fun. Honestly it’s kind of weird right now, the concept seems incredibly interesting

One of my more recent anticipated releases was this book! I’m like 10% into it and honestly not really enjoying it as much as I thought I would ahaha! Why is literally every single book disappointing me so much!! IDK!!

Just want to cut in and say that I literally hate block editing so much. It’s the worst thing ever. I am very Angry that WordPress chose to do this. I can tolerate and even sometimes appreciate block editing when it’s in certain forms, like with Notion & how it emulates bullet journaling. But for actually writing things, block editing is terrible!!!!!

Also, they made the classic editor… worse than before…

ANYWAYS… I usually do like. pretty extensive lists and stuff on here but I’m feeling really lazy (and this post is already at 1400 words… so many…) so I’m just going to tell you about two sitcoms I watched recently!

⟶ Arrested Development was so good, and I would say if it continued (and wasn’t canceled), it would probably be my favorite sitcom of all time. The humor and quality is just soooo good, but the last two seasons of the reboot took the story in directions that were just. Not Great to watch. I STILL RECOMMEND IT THOUGH.

⟶ Community is another gem, and guys. There are SO many memes out there from Community that you don’t know are from Community. I think the humor in this is pretty good, but this also fell flat on many levels, probably because of the changes in directing lmao.

(That Jeff/Annie romance… ew… in the first season she is 18 and he is 35… how is that… acceptable… like yes, she does grow up, but I wished they treated it as a childish fantasy of Annie’s instead of an actual romance.)

Oh my god… this is literally one of the greatest animes ever.

How do I explain how much I love the anime? Even though there’s only one season! I felt VERY unfulfilled, and yet the art is so high-quality, as well as the characters? (Although the art is different in the manga, which I’ve read a little bit of.) 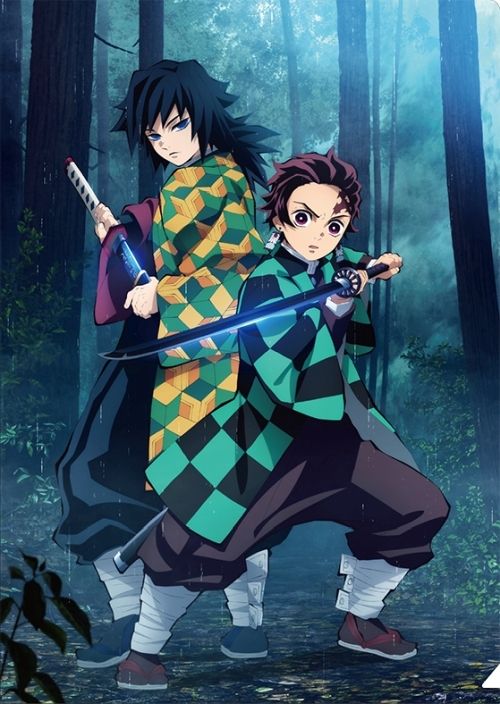 Also this guy (the one on the left) is my actual favorite character. LOVE HIM.

Anyways, this is really good and addictive and I highly recommend 🙂

Honestly I was going to stop right there, but then I realized that my title said “yearly” update and I included no information about the year?? Besides the two shows I watched?? So!